The Secondary Source Sitting Next To You

Like a lot of people who teach in the humanities, I have spent years complaining about the ways my students use secondary sources in their research papers. Most often, a choice excerpt gets dropped into a paragraph with only quotation marks separating it from the surrounding prose. Slightly better, a student may call out the author of the source—“Smith writes, ‘The Great Gatsby is a scathing critique of the American Dream’”—without showing any awareness of what Smith has to say beyond the single quoted sentence. Students come to my office hours and tell me, “I’m not too worried about this paper—I found some good sources and have a lot of quotes that support my point.” When I explain why a writer shouldn’t be citing only those sources which support his or her point, the student sitting my office generally looks at me as if I am extolling the virtues of driving on the wrong side of the road. Why cite a source, the student seems to think, if not to borrow its authority for my argument?[1]

Cobbling together isolated, disconnected “quotes” to produce a research paper is not just a bane of writing teachers. It is symptomatic of students’ deficiencies in what many librarians now refer to as “information literacy.” Researchers with The Citation Project studied a sample of student writing and found (unsurprisingly, any humanities professor will probably say) that students virtually never summarize entire sources but rather pluck individual sentences out of them for quotation or paraphrase—raising the question of whether student researchers actually read their sources or merely skim them for useful bits. Wendy Holliday and Jim Rogers have observed tendencies among students—and, to an extent, among writing instructors and librarians—to talk about “finding sources” rather than “learning about” a subject. The consequence, they argue, is that sources become “reified as objects”—of which, in many common assignments, students are required to track down and cite some minimum number. When students regard sources as acquisitions toward a quota, they do not see them as ideas, outcomes of a fellow researcher’s analysis, or reflections of an author’s scholarly agenda.[2]

A few years ago, when I was preparing to teach one of my college’s First-Year Seminars, I asked myself: what am I most dissatisfied with about students’ preparedness for my courses, and how could I try to prepare them better at their point of entry into college? It was this shallow and utilitarian relationship to secondary sources that I wanted to change, and I decided that changing it would be the hidden curriculum of my seminar on a single year in American history and literature, “1862: America Undeceived.” I had also been interested, for a variety of reasons, in moving more of my students’ writing on to the public web, and I conceived an idea to marry the two goals.

If I could “publish” my students’ writing—and I very easily could, using WordPress—could students see their peers’ essays as secondary literature? If I asked them to cite sources written by the very people sitting next to them in the classroom—to see “sources” as the work of actual peers, rather than of invisible “authorities”—would they begin to regard those sources not just as reservoirs of ready-to-use quotations but as the products of particular thinkers’ research processes, inflected by particular points of view?

In a two-part assignment that was the centerpiece of my seminar, I first asked the fifteen students to conduct primary-source research on the events of a single day in 1862. They used digitized newspapers and periodicals, among other sources, to locate artifacts of their chosen day. They practiced writing about these artifacts in blog posts (on Moodle, my college’s course management system—visible only to other students in the class). After a series of in-class workshops focused on these blogs—designed to model and teach effective description and interpretation of primary sources—the students crafted essays reporting their research on single days. These essays were posted to a WordPress site near the middle of the semester, and they became required reading for the class.

In the second phase of the assignment, the students had to construct an argument about continuity or change over time in 1862. They needed to cite at least three essays written by their peers (about three different days), supplementing that with additional secondary research. These final essays were published online, too, to form a student-authored anthology on America in 1862.[3] 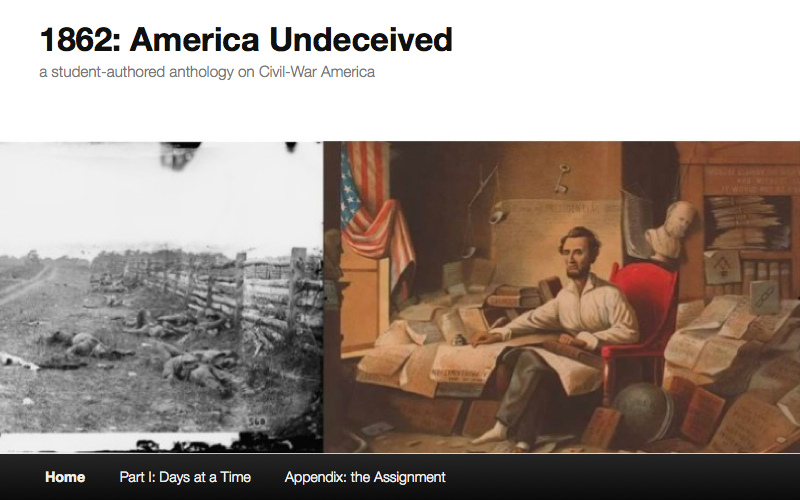 My most basic goal was that students would leave the course with a clear understanding of the difference between primary and secondary sources. Further, I hoped that, when students cited their peers in the final essays, they would be highly aware that their “secondary sources” were not the final word on how to interpret historical material. They would have seen the research process behind each source, beginning with the blog posts in which their fellow authors initially described their primary sources. Students reading a peer’s essay might see that the peer had further developed or even changed his or her analysis since the blogging stage.

I also aimed for students to understand that research is the work of a scholarly community. Their anthology would be, necessarily, an interconnected web of cross-referenced research. I announced to the seminar at the outset that, at the end, I would measure each class member’s “impact factor” — how many times was each of the first-round essays cited during the second phase? — and award a prize to the most frequently cited author.[4]

What were this experiment’s outcomes? In certain respects, they were disappointing. A majority of students (about 10 out of 15) persisted in engaging with secondary sources—the work of their peers—primarily by quoting isolated excerpts. At worst, a few students only re-used primary source material from peer essays (“quoted in. . .”) or cited their fellow students’ work as the source for such information as that 22,000 men died at the Battle of Antietam.

In other respects, the results were more satisfying. The students’ final essays did evince a greater tendency (compared with my experience giving research assignments to other beginning college students) to assimilate research and adapt it to new ends. Even those students who primarily only quoted from their peers’ work, as opposed to summarizing it, were not lining up those quotations to bolster a prefabricated thesis they had hatched. Most of them were drawing connections among multiple researchers’ analytical assertions, if only at the level of isolated sentences. In some of the best essays, students apprehended both the information and the point of view in their peers’ essays and—as good researchers do—applied that information in other contexts. One student, writing about the role of religion in Americans’ endurance of the Civil War, cited a peer’s essay about December 25, 1862. The student summarized part of that essay (“argues that Christmas gave soldiers a break from the harsh realities of war”), quoted a relevant portion of it, and adduced soldiers’ Christmas celebrations as evidence of Americans’ recourse to religious observances for coping with the duration of the conflict.

It pleased me to see my students taking each other seriously and treating their peers as authorities. The student writer I just mentioned engaged with her peer’s work (the Christmas essay) no differently than she did (in back-to-back paragraphs) with the work of James McPherson, one of the most eminent living Civil War historians. In this sense, the class really did come to function as a small scholarly community. Although my students were universally unaware of the role “impact factor” plays as a metric in academic literature, and at first only dimly grasped the idea that citations register kinds of influence, my end-of-term review showed that they had been astute readers of their secondary sources. Although I feared they might tend to cite mainly the essays from which they found it easy to pull quotations—ones about high-profile topics, for instance — the essay with the highest impact factor turned out to be the one to which I had given the highest grade: a subtle analysis with little topical connection to other students’ essays but with a thoughtful and illuminating perspective.

There were some ancillary benefits of this assignment, too. Although its effectiveness in addressing the problems I set out to tackle was mixed, it had an apparently positive impact on other aspects of students’ writing. In evaluating the seminar, one student reported feeling “very motivated to do great work since I knew all my classmates were going to see my work.” Another found that seeing—and reading carefully—other students’ essays “allowed me to get a better grasp for what I was and was not doing right in my own writing.” And several students appreciated the way in which online publication dignified their writing. As one student put it, turning student writing into assigned reading was a way of “giving our hard work the credit it deserves.”[5]

As an intervention in students’ information literacy, then, the experiment was at best partially successful. It was not powerful enough—at least as a one-time exercise—to dislodge all students’ habits in writing research papers. Those who see “research” as plucking quotations from sources will not easily be transformed into deep readers of secondary literature. A First-Year Seminar may not have been the ideal setting in which to try this, and I hope to undertake something similar with more advanced students.

The assignment seems to have been more successful as a form of academic socialization. It did literalize the metaphor of scholarly “conversation.” And it definitely succeeded in getting students to assimilate new knowledge and adapt it to new contexts. They really read and synthesized their secondary sources. This success may not have been an effect of the assignment’s web-based dimension at all, or even of its peer-authorship feature. Probably more important is that I did not ask the students to begin their research by coming up with a topic. Unlike the classic research-paper sequence (choose a topic, go find sources, then write paper), in effect I gave the class a finite repository of sources — their own first-round essays — in which they had to find meaning. The assignment redirected students’ energy from finding sources to understanding what the sources had to say. That restriction of scope is not exactly a feature of doing a web-based assignment—almost the contrary—but web-based publishing did ease the logistics of it.

About the author: Christopher Hager is an associate professor of English and co-director of the Center for Teaching and Learning at Trinity College. He is the author of Word by Word: Emancipation and the Act of Writing.

Christopher Hager, “The Secondary Source Sitting Next To You,” in Web Writing: Why and How for Liberal Arts Teaching and Learning, ed. Jack Dougherty and Tennyson O’Donnell (University of Michigan Press/Trinity College ePress edition, 2014), http://epress.trincoll.edu/webwriting/chapter/hager.

See an earlier version of this essay with open peer review comments.[6]